Every Autumn, one of the houses on our block walk with Coco puts a bucket outside of their front drive with an invitation to help oneself to bags of their windfall Bramley Apples – what a lovely way to share with neighbours. And by lovely I mean lovely for my family, courtesy of the kindness of these neighbours because we get crumbles and baked goods out of their apples for free ^.^

Even after I made an 8 portions Apple Crumble (!!) I still had 3 apples leftover, and since Adelyn keeps very seriously saying “MUFFIN” at me, I figured I’d whip together some Apple & Sultana muffins (inspired by the BBC’s) as an Autumnal variation on our usual Banana muffins! 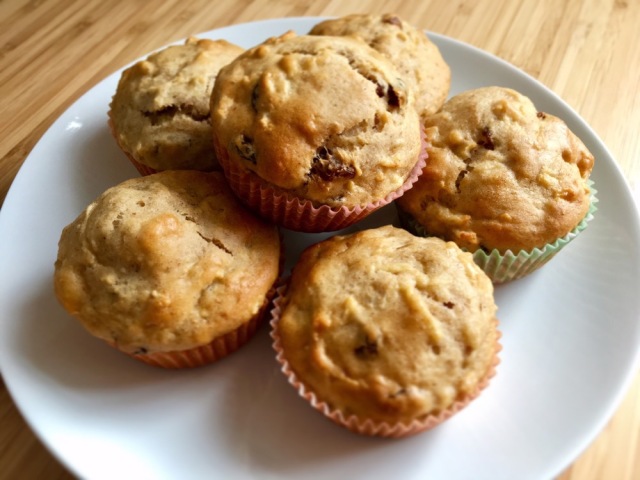 In a big bowl, combine the dry ingredients; the self-raising flour, baking powder, cinnamon, wholemeal flour and sugar – give it a good mix together.

In a jug (or another bowl), beat the milk, eggs and oil together. Add this to the dry ingredients bowl and mix well.

Stir in the grated apple and sultanas and give it one last good stir.

Carefully spoon the mix into your prepared muffin cases and bake for 25 minutes until golden on top.

An early Christmas present for you, my dear friends and readers 🙂

Fancy a treat that looks and tastes wonderfully Christmassy – WITHOUT resorting to OD-ing on weird Christmas spices (cinnamon and cloves, I’m glaring at you)? AND literally just involves stirring and leaving?

I’d seen this in Nigella Lawson’s Christmas book (and show) ages ago and pooh-poohed the very idea as overly sweet and sickly.

I guess something about being a mum now, and one who can be relied on to turn to sweet things to prop me up on those days, that I finally thought that it was time to try the recipe for a recent family gathering we had at home. Ooh they went down a treat and turned out to be rather moreish.

The Amaretti adds a nutty lightness, which when combined with the Brazil nuts gives a lovely crunch that contrasts the sumptuous softness of the marshmallows – and a little cheeky zing of a glacé cherry to perk it all up a bit. Oh – AND IT’S SURROUNDED BY CHOCOLATE.

I took the liberty of modifying the recipe slightly to conform with the weight of the packets to be found in the shops.

Go nuts with your display as your decorate the finished piece, it’s a lot of fun and I look forward to making this with Adelyn next year!

If you have any leftovers (or are needing to hide some away), they’ll keep nicely in the fridge for a week. You can also freeze them, just defrost them in the fridge overnight to eat them again.

I’m a big fan of finger foods, especially ones that are quick to make and packed full of nutrition – courgette, carrots and spinach with the added hit of cheese for that moreishness…oooh these’ll be a hit in your household too if my family are anything to go by!

Adelyn literally bounces and makes strained squealing sounds when she sees me coming with these. Just like her Papa.

Remember – babies under 1 years old shouldn’t have salt added to their food as their kidneys aren’t mature enough to process it efficiently so there’s no need to season this. The cheese contains enough savoury flavour to satisfy even an adult’s palate.

FREEZING TIP: These freeze well in an airtight container or baggy. You can warm them up in the oven from frozen for 15mins (or leave to defrost) to enjoy all over again. 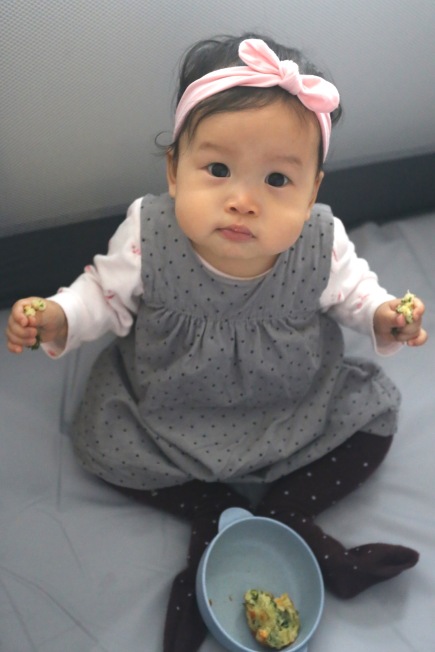 Adelyn using two hands to devour hers – a sign of enjoyment!